My company Foundeo Inc. released a new free web service today called HackMyCF that allows you to scan your ColdFusion server to detect the absence of recent ColdFusion security hotfixes as well as other security problems.

The site generates an email report detailing what security issues were found, here's an example: 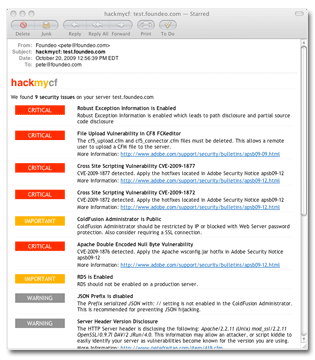 I would love to hear your feedback!

I have yet to try this out, but I think this is an amazing idea!

Concerning the "Server Software Disclosure" warning, here's an article that describes how to change the server header in IIS7.

The comments also contain an interesting discussion of whether this is really necessary from a security standpoint, and some insinuations about why Microsoft didn't make this a simple change.
by David Hammond on 10/22/2009 at 10:04:15 AM UTC

Darn it, I meant to say concerning the "Server Header Version Disclosure" warning. The "Server Software Disclosure" is a simple change in IIS.
by David Hammond on 10/22/2009 at 10:08:42 AM UTC

@steveeray would you mind emailing me your server domain so I can look into it. Is it possible that some files still existed in your CFIDE after the update.

I love this. Great idea! I never knew I needed to apply an Apache patch.

Unfortunately I have some other servers I would like to check but I do not have an E-mail address at those domains since our work E-mails are all on a secondary domain that the site doesn't operate on. Is there a way I can check those?
by Brad Wood on 10/22/2009 at 4:34:16 PM UTC

@Brad, yes I added a feature that allows you to use any email address provided that you can create a temporary file in the web root using a certain file name. Just enter the domain and email and it will tell you how to do it.
by Pete Freitag on 10/22/2009 at 5:06:17 PM UTC

Hi Pete-
I ran HackMyCf before I applied any security patches on my 8.01 server yet it found nothing. Could it be because I have CFAdmin behind a firewall or an alternate port.
by doug on 02/15/2010 at 2:23:33 PM UTC

Does that mean I do not need to apply these patches since I have secured CFIDE. We have always moved them to an alternate port and left that without public access. Only someone on our VPN can see it which is extremely limited.

I have a second question as well. In our PCI Compliance we found we were open to XSS attacks on our forms. One of the developers wrote something that escapes <>" and "" and the example code the compliance company sent no longer works.

I know this is a stretch to answer but if we prevent those characters could that be the end of the PCI Compliance certification issue. IT seems too easy.
by Doug on 02/15/2010 at 5:12:07 PM UTC

@Doug - I would still recommend applying the patches even if our remote tool can't find them it doesn't mean a hacker can't.