SameSite cookies are a great technique for mitigating Cross Site Request Forgery attacks. The only downside is that not all browsers support them yet (ahem... looking at you IE).

Another downside you may find is that most application server software does not support them yet, for example javax.servlet.http.Cookie does not yet have support (so languages like CFML are probably waiting for this to add as well), PHP has a RFC and hopes to add them in 7.3, ASP.NET Core has added them to 2.0 and .NET Framework 4.7.2.

If your current platform doesn't support them yet but you want to use them, then you can use the web server to append the SameSite attribute to the Set-Cooke http response header.

Here's how you can do it in IIS using the IIS URL Rewrite Module: 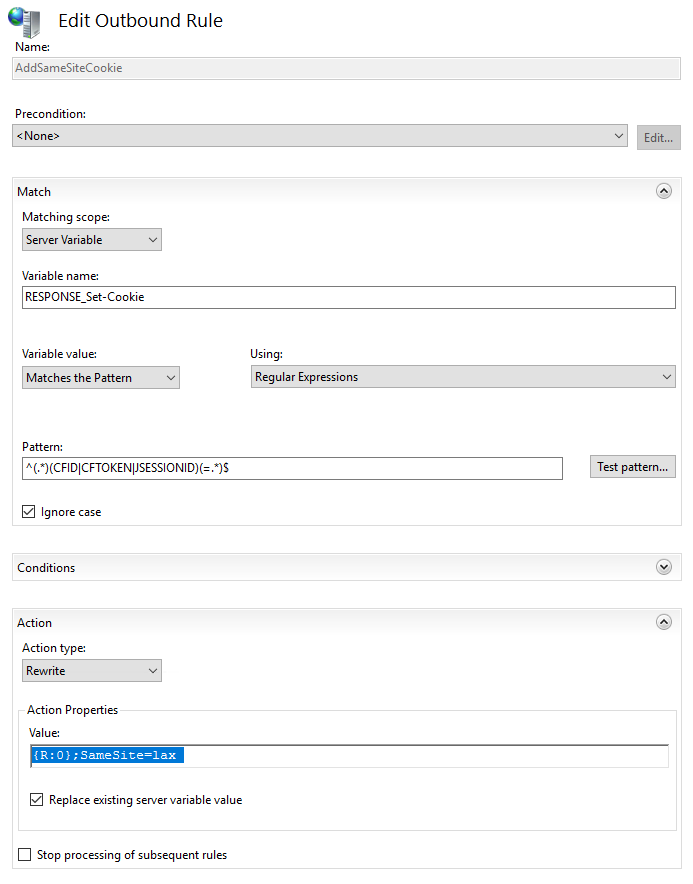 Or here's how you can add it to a single site using web.config files:

Great stuff, Pete. Thanks. And in case anyone misses it in the related posts links above, note that he covered apache in a later post: https://www.petefreitag.com/item/894.cfm And before someone asks, support is due to be added to cf (2018 and 2016) in a coming update (yes, frustratingly late). But this should help folks until then, and also those on earlier CF versions.
by Charlie Arehart on 03/11/2020 at 10:06:02 AM UTC