When attempting to fire up a bunch of docker containers using docker-compose on a Mac, one of the containers was randomly exiting with the exit code 137. The message would look something like this:

My first reaction was to try to quickly run docker exec -it container-id /bin/bash and then take a look at the logs, but before I was quick enough to do that I decided to look into exit code 137.

As it turns out this code is commonly associated with Docker for Mac not having enough RAM allocated to it. More specifically the Linux OOM (out of memory) Killer, kicked in and terminated the process.

So it is an easy fix, go to the Docker Menu and select Preferences then the Advanced tab and increase the Memory. 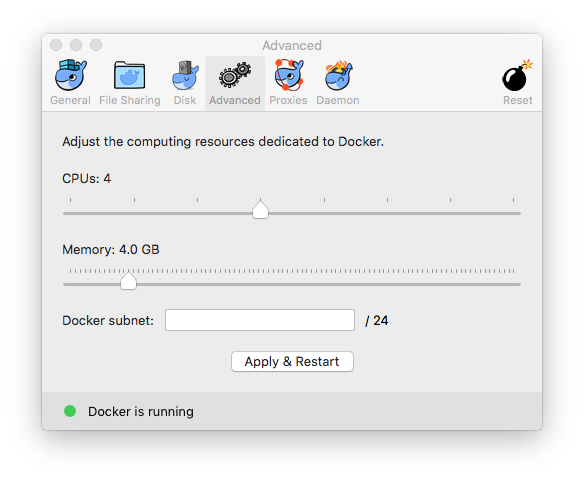 My docker memory was set to 2.0 GB (perhaps the default), I increased it to 4.0 GB and problem solved.

You may also be able to get around this problem by setting the --memory limit when starting a container, or if you are using docker compose, you can do something like this in your docker-compose.yml file:

Docker Container exited with code 137 was first published on January 18, 2018.

You saved my day with your solution.
I was trying to run druid in docker and received this "container_name exited with code 137" many times. With your solution, the problem went away.