A whole new kind of CFM 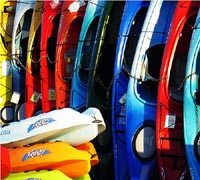 I learned about a new kind of CFM yesterday - cubic feet (of water) per minute. I went whitewater kayaking last night on the West Canada Creek (in the southern adirondacks), it was my first time, and a lot of fun!

Those of you who know about whitewater, probably know that the rate of water flow is usually measured in CFS, not CFM - but I figured it made for a good start to this entry.

I have done some lake, and sea kayaking, and had always wanted to try some whitewater kayaking. A friend of mine from college asked me to go with some of his co-workers, so I took him up on it not really knowing what to expect.

Unfortunately the kayak I was using was a little too small for me, and as I found out white water kayaks are pretty small to begin with. Additionally I don't know how to do an Eskimo roll, and I didn't have sunglasses with me.

The boat size didn't really turn out to be too much of a problem, other than fatigue, which I'm sure I would have had otherwise.

Not knowing the eskimo roll, wasn't that big of a deal either (on this route anyway). If I were to roll, I just had to pull the escape flap on the skirt, and hang on to the boat. I came very close to rolling twice, the first time I was had come over a rock sideways, but was able to lean the other way fast enough to avoid tipping.

The second time was on one of the more choppy sections of our route. My instructions were: just go straight down the middle, if you turn too much I'll roll. Towards the end of the hard part I hit a wave, and was put in a spin - rather than correcting I went with the spin, and ended up facing upstream. I went through the rest of the rapids backwards.

The lack of sunglasses was only a problem for about 10 minutes when the sun was directly downstream, and causing a lot of glair. Luckily the conditions were ok, and that didn't turn out to be a problem either.

I made it through the 6 mile run unscathed in a little over an hour and a half, and had a blast. My one bit of advice for beginners is to have fun when your going through rapids. I found I would start out tense in a rapid, but then I just had to tell myself to just have fun, and it made it really fun. I also think having a foundation of crazy adventure (rock climbing, ice climbing, mtn biking, mountaineering) helped make it easier for me.