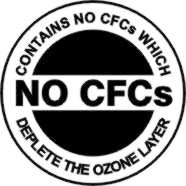 I have probably seen this logo a several times in the past, but it stuck out last time I saw it. It says: This product contains no CFCs which deplete the ozone layer. Of-course when I see that I think of ColdFusion components, not Chlorofluorocarbons

Chlorofluorocarbons (CFCs), along with other chlorine- and bromine-containing compounds, have been implicated in the accelerated depletion of ozone in the Earth's stratosphere. CFCs were developed in the early 1930s and are used in a variety of industrial, commercial, and household applications. These substances are non-toxic, non-flammable, and non-reactive with other chemical compounds. These desirable safety characteristics, along with their stable thermodynamic properties, make them ideal for many applications--as coolants for commercial and home refrigeration units, aerosol propellants, electronic cleaning solvents, and blowing agents. Production and Use of Chlorofluorocarbons experienced nearly uninterrupted growth as demand for products requiring their use continued to rise.