Last week I wrote a Server Memory monitoring tool using Flash Remoting. I'm not much of a flash developer, but it only took a few hours. Here's a screen shot of the tool: 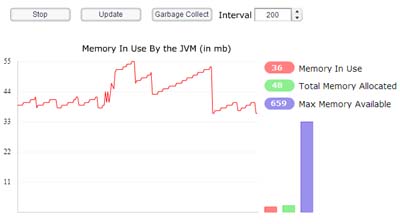 Keep in mind this tool only shows the memory for the JVM instance that ColdFusion MX is running in. It does not show the overall system memory.

You can download the server memory tool here. Keep in mind that this is not something you should run wide open on your server. Put a password on it!

I noticed you have a parameter of "<param name="allowScriptAccess" value="sameDomain" />" What if I want to run this across domains? Is that possible. I have a crossdomain.xml file in the domain I want to access the CFC from, but the swf wont load the data when called from a separate domain.
by Matt Knight on 09/01/2004 at 11:44:35 AM UTC

Kewl tool. I can't get it working though yet. I dropped the cfc in a diff location. I can hit it with http:foo/servermemory.cfc?wsdl and I can write a cfm that instantiates it and calls a method. But I can't get the swf to do its thing. does gwURL point to the full URI of the WS replete with ?wsdl??? The default setup wouldn't work either. Woudl multiple JRun instances cause issue with it?
by doug on 09/14/2004 at 12:46:21 PM UTC

Doug If your running JRun, make sure you disable the JRun flash remoting war, because they will cause a conflict.
by Pete Freitag on 09/16/2004 at 5:55:53 PM UTC

The only oplace I see Flash Remoting Ear is in the default server in the JMC. Other little Flash escapades work fine for me. I'm guessing its the gwURL var which looks like this: gwUrl=http%3A%2F%2Frapiddev%2Ealltel%2Ecom%2Fwebservices%2Fcom%2Falltel%2Fdouglasknudsen%2Fservermemory%2Ecfc&servercomponent=ServerMemory.ServerMemory This thing is real neat looking though Pete.
by doug on 09/17/2004 at 1:30:04 PM UTC