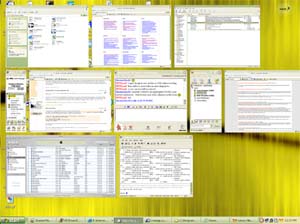 Exposé is definitely my favorite feature in OSX, and just the other day, I found a Windows version of Exposé called iEx.

iEx does the job, but it can be a bit flaky. For instance if you hold down F9 you computer will sketch out, and sometimes you need to force the window to redraw after you select it by moving or resizing it. If you have too many windows open sometimes they don't all fit on the screen (I'm not sure how Apple handles this). It is also not nearly as fast as Apple's Exposé. I'm running iEx on a 2Ghz P4, and it takes about 1-2 seconds for the thumbnails to show up, and on a slow Mac they will show up pretty much instantaneously

I found this on Jason Shellen's blog where he mentions two other programs that mimic Exposé:

Knock-offs of the Expose feature of OSX are plentiful. I purchased WinPlosion (formerly WinExpose) Price: $9.95. WinPlosion is a bit slow and not really worth the money. Here are a few others that mimic this feature on Windows as well: iEx Price: Free. Windows Exposer Price: $7.

Expose for Windows was first published on April 14, 2004.

I have no problem paying for software that works, but I did have problems with WinPlosion on a dual headed machine. It would hijack my cursor on one of the monitors. They may have fixed this by now, but right now I'm not running either of these programs.
by Pete Freitag on 10/06/2004 at 10:07:14 AM UTC
Checkout TopDesk - http://www.otakusoftware.com - it handles minimized windows and has mouse hotkey support.
by OtakuSoftware on 11/19/2004 at 8:55:00 AM UTC
My personal favorite is Entbloess. Its one of the best window switchers that I have found. Its very reliable, reasonably priced, and fast relative to all the others that I have tested. Plus, it works on both XP and 2k, which is a very rare feature. Go check it out: http://www.entbloess.com/
by Keith on 12/08/2004 at 6:37:02 PM UTC
I fully agree, the above comment seems to be written by someone who has some "personal" problem with the product WinPLOSION (in other words: I am pretty sure it will be someone from another company who tries its luck in making some kind of an Exposé-clone for MS).
From my point of view I prefer reading the "why" a product is bad, not only a statement "that a product is bad", without further explanation...

I personally use WinPLOSION and I am fully happy with it, it is really fast and the animation is smooth.

All that "this is better and smoother" speech... You should understand that the development team of a small application like a taskmanager replacement are very small. I guess 1-3 developer... That also means that they have a limited number of computer to test and optimize their software. Maybe the developer team of Entbloess uses systems with an AMD CPU and a nVidia graphics card... And the team of WinPLOSION uses Intel and ATI... Their applications are optimized... For their system, but maybe not for other configurations. One app runs smoother on one system, on another system it's the other one.
It would really make sense, if you guys not always complain about performance and missing smoothness but just tell your personal experience AND your hardware configuration!
by Olli on 07/07/2005 at 4:19:14 PM UTC
abeman: The new TopDesk trial (v1.3.5) lets you change all the configuration options.
by James Stewart on 08/14/2005 at 11:55:08 PM UTC
Ben: TopDesk works fine with dual monitor setups.

I totally agreed with you comments about ignoring certain posts. TopDesk, Entbloess, and Winplosion are all available as trial versions, so I'd suggest that if you're looking for this kind of utility then the best thing to do is try out all three to see which one suits you best.
by James Stewart on 09/06/2005 at 1:01:27 AM UTC
Sorry if there was any misunderstanding Jamie, but I'm actually from Otaku Software, the guys who make TopDesk (my own blog is http://www.otakusoftware.com/blog).

I don't want to get involved in any tit-for-tat about which application is better, as I think its best for users to decide for themselves. If a user prefers another application to TopDesk, that's fine. If they want to tell others that they think another application is better than TopDesk, thats fine too. Each to their own, as they say :).
by James Stewart on 09/07/2005 at 10:30:10 AM UTC
It's funny that so many of the pro-winplosion messages mention performance and smooth animations. You jerks should spend your time improving that crap product and not reading blogs.
by Elvis on 10/02/2005 at 10:00:21 PM UTC
MAC developers put a lot of work to create nice applications such as Expose. Why can't the Win version just work in the same way?

Expose can be opened in two ways: by briefly pressing the function key (e.g. f2) and at that point expose will stay open until a window is selected or the same function key is pressed again (same as in win versions but not in winPlosion!!). The second and best way to open the original Expose is by keeping the selected function key pressed. Expose will stay open until the same key is released. NICE & Smart! Strangely this second option was not picked up by the Win imitations.

As previously mentioned here, there are only 3 Win utilities worth mentioning: entbloess, winplosion and topdesk. For its simplicity my favorite is topdesk but anyone serious about using this tool, should install all three and pick the one that better suits his needs.
by mario on 12/02/2005 at 7:27:49 AM UTC
my personal experience after trying them all on a p4 300mhz, 3gb ram, nvidia fx5500 with 128mb vram...

entbloess seemed to be the most feature rich in terms of customizability. i liked how you could customize the backdrop and the fonts and all sorts of other sillyness. but it didn't work with my multiple monitors (i have a three-headed setup), so i had to keep looking. if you're running one monitor, i reccomend entbloess over most of the other ones, at least if your hardware is similar.

iEX had all kinds of old VB6 dependencies i didn't feel like installing, so you're on your own there.

winGlance was decent, but again, problems with the multiple monitors.

exposer was the only one out of the bunch i can say performed outright poorly on my system. there didn't seem to be any animation whatsoever really. and while it shows the titlebar zoomed up when you hover over the window, it doesn't recognize my window manager, so if you're using windowblinds, ignore this.

in the end i went with topdesk. i think they've probably changed their demo since last year, because i saw all the features that i got with the final version. it worked fine with multiple monitors, had enough speed options that i found a decent setting for my system, etc

it also had a few things i hadn't found in the ones above, namely it has vista's upcoming 3d task switch as a mode, and was one of the few that got the spatial relationship of the windows right, for "true" expose functionality.

my only complaint was that it didn't notice a few non-standard application windows (winamp, trillian's buddy list window, though it did see the individual chat windows).

i noticed that they're trying to work that out, probably for the 1.5.x cycle (1.4.x is largely cleanup)

another thing it doesn't do too hot is active updates for say, a video window. in that department, entbloess seemed to reign supreme. entbloess also seemed to be the biggest RAM-hog however, particularly with those aggressive settings, and i think it peaked at around 80mb of ram with five windows open. comparitively, topdesk took up around 20 to 40mb, depending on how conservative you set the options.

i'd reccomend entbloess if you have only one monitor, like the active previews feature, and have a lot of RAM you don't mind throwing at a task switcher.

i'd reccomend winPlosion if you're looking for a middle-of-the-road application and don't have too much trouble registering it.

i'd reccomend topdesk if having the effect maintain its spatial positioning properly is important, have multiple monitors, or you also want to be able to mimick the upcoming vista task switch functionality.
by hedgehog on 03/21/2006 at 10:28:55 PM UTC
Just installed iEx. Works like a dream on my Thinkpad (Pentium M T43 system) - no lag at all. Thanks for the pointer.
by Ross Parker on 05/18/2006 at 4:13:55 AM UTC
"If you have too many windows open sometimes they don't all fit on the screen"

Apple's implementation just makes them smaller. I haven't had enough windows that they wouldn't fit at 1x1 pixel each, so I dunno what happens then.
by Stripes on 08/22/2006 at 10:05:11 PM UTC
With my setup, the only program that came close to being impressive was Topdesk. WinPlosions wouldn't even run, I got some type of error every time I ran the program. I have 4 monitors, so a lot of the programs immediately didn't work. I also want to preview ALL windows, not just Maximized one, so other programs also immediately were useless. Topdesk is customizable. On my system, it uses 33 megs ram, but with 4 gigs ram, thats not a problem.
by Louish on 09/26/2006 at 12:48:35 PM UTC
i hate to say it, but both iEx and Winplosion dont seem to work on my PC, which i cannot understand as it is 3.8Ghx, 128Mb, graphics, 1.25Gb ram, and WinXP
why would these nor work on my pc?
the only reason i can think of is my dual-screen setup, why i never seem to get these programs working just makes e want to turn to mac even more!!!!
by dan on 02/16/2007 at 7:30:37 AM UTC
Well, thanks all for your comments. I just evaluated AnthaBounce (previously WinPlosion) and Reflex Vision( previously Entbloess). Here are my thoughts:
1) WinPlosion is higher performance and the windows move smoother BUT it is very buggy. There are graphic fragments and the view desktop leaves all windows minimized no matter what.

2) Reflex Vision works well, I only say one minor bug BUT it is slow when bringing up the windows. On the good note, there is a ton of configurable options, but none of which improved performance much.